How does architecture catch the eye?

The 2018 Acton-Boxborough Photo Contest, an art-science project, run by Genetics of Design, with help from high school students and supported by a local Cultural Council (ABCC), came up with these intriguing answers.

In 1stPlace, Woodlawn Chapel, Acton, by Sandra Hinds predicts the visual sequence people will likely take the first few seconds they see the building, at left; the original photo’s at right. 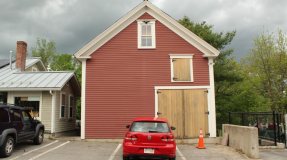 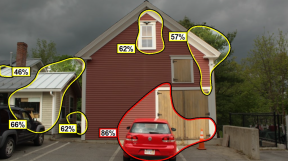 In 2ndPlace, Red Barn in West Acton, by Christopher Duncan shows the ‘regions’ which draw in the eye, and likelihood of doing so as a percentage (areas outside delineations are ignored); the original image is at right.

In 3rdPlace, Acton Memorial Library, by Sanjana Cheerla, above, shows a heat map glowing brightest where people will likely look most, fading to grey and black in areas they’ll ignore; the original is at right.

High school students took the photos and interns Anindita Lal and Siraj Chokshi, working with Genetics of Design, selected them from more than three dozen entries. Winning photos were chosen based on composition, originality and the quality of images they generated using software that predicts how people look at things during pre-attentive processing, that’s in the first 3-5 seconds before the conscious brain can get into the act.

3M’s Visual Attention Software (VAS), based on 30-years of eye-tracking research studying how human eyes move, created the heat maps, visual sequence and regions of interest diagrams shown here. Interns Anindita Lal, Siraj Chokshi, and Christopher Duncan ran the original photographs through the VAS to display these intriguing findings. They help us understand how the human brain is hardwired without conscious control to seek out areas of contrast, edges, faces and has an affinity for the color red.

The images and others like them will be on display at the Discovery Museum in Acton, MA this August. The intent is to make learning about science and biology fun; studies like these can also be useful in understanding way finding and walkability and implementing designs that improve it.