If You Want To See How People ‘See’ Boston City Hall – Eye Track it!

Posted on February 4, 2018 by Genetics of Design

Piazza del Campo in Siena, Italy and Boston’s City Hall Plaza are often cited as the best and worst of what architecture can be. The Italian piazza with its crenelated city hall and tightly-aligned buildings has invited public gathering and acclaim for centuries, frequently making best-in-design lists. Boston’s 50-year old plaza, on the other hand, an urban renewal project from the 1960s, has never lived up to its promise. Instead, you’ll find it listed as one of “the most disappointing places in America,” and even calls for its demolition.

That’s been studied a good deal. Researchers have carefully analyzed Boston City Hall Plaza for years, including in graduate school theses and this recent Tufts University planning class. In 2015, Boston’s then-new Mayor, Marty Walsh, launched yet another initiative to find ways to improve the look, feel and function of his workplace.

So, why does Boston’s Government Center fail from a public perspective? Frequently mentioned strengths of the Italian vs American counterpart include:

We buy it, yet our research suggests there’s something more. Indeed, to make sense of Boston City Hall Plaza today, we think you first need to ask really basic questions – like these:

Using biometric tools, such as eye tracking, which measures our conscious and ‘unconscious’ eye movements as we take in visual stimuli, and is frequently used in advertising and web design, we can now do so, efficiently and inexpensively.  So what happens when you eye track Boston City Hall?

Much more than we expected! In fact, it took us a while to understand our findings; but after running four pilot-studies, eye tracking more than 150 buildings both within and outside Boston over two years, we can now report with some authority:

Boston City Hall and Plaza fail to attract the public because the building and surrounding spaces don’t provide the fixation points in the first 3-5 seconds the brain needs to see (that’s during pre-attentive processing, before the conscious brain can get into the act), to most easily regulate, feel at its best, and effortlessly move us forward.

It was astonishing for us to ‘see’ how difficult it was for people to actually look at, or ‘fixate’ on any part of the building, even with its picture on a monitor placed directly in front of them.

Check out two of the images from our study below. Note where people look: at City Hall’s edge conditions, at other people, at vehicles in the vicinity. Only at six (6) seconds in did viewers, not all, but 75% of them, look directly at the building – apparently the high contrast large black windows with the engraved letters above catching their eye. After that, almost half the participants (15 of 33) quickly looked away to focus on outermost edge conditions again.

Of couse, a next question would be, what kind of architecture draws the eye in pre-attentive processing? That’s critical to understand if we want to design people-friendly places!  And one quick answer would be, The Old State House, (c 1713,) a building one-tenth of a mile away from City Hall,  with clear hierarchy, bilaterally symmetric-arrangements of windows, and details to delight to eye -no matter the century!

The shadow study  above showing eye-tracking results from our first pilot-study of Boston City Hall using iMotions biometric software glows brightest where people look most, fading to dark grey in areas ignored. Note how much of the building and plaza are in the dark. The green-circled numbers show seven areas of interest (AOIs) that drew the attention of 33 participants sequentially. Yellow boxes highlight more eye-tracking metrics.

Fixation Sequence (1 – 7) Boston City Hall (front elevation)
1. By 1.3 seconds, 32 of 33 participants look at the area with a person and through an opening in City Hall to light beyond, (we’re hardwired to look for people and areas of high contrast without conscious effort).
2. Next, 31 of 33, focus on a second group of people and high-contrast area; gaze again appears directed through the building rather than at it.
3. 25 of 33 then apparently move to study the text and contrast provided by the elevation’s tallest punched windows; this happens at 6 seconds, when more of  ‘conscious’ brain may come online.
4. 15 of 33 then notice a side wall against the skyline; (as mammals, we innately seek out well-defined edges, it’s a survival strategy).
5. At 12.6s, 13 of 33 shift focus to a person and trucks in the courtyard.
6. 9 of 33 focus on high contrasting section of brick wall, slightly above trucks.
7. At 13.6 seconds, 6 out of 33 finally looked at an almost centrally-placed location on the City Hall building, high-contrast windows above 2nd fixation point; our bifocal vision favors looking at things centered in front of us, so this move seems to take a while. 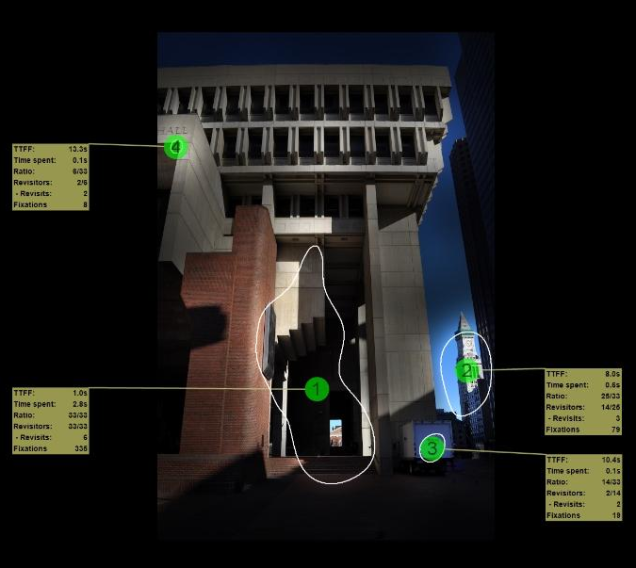 1. By 1 second, 33 participants fixated (335 times) on the high-contrast central area of image; again gaze appears drawn to the light, blue sky and brick building beyond plaza.
2. By 8 seconds in, 25 of 33 viewers, or 75%, are looking away from City Hall to iconic Custom House Tower.
3. 14 of 33 went for the truck, and its contrasty print letters;
4. At 13.3 second, 6 of 33, or 18% of viewers, go back to look at the building, likely drawn to contrasting color, sharp edges and letters above entry.

Many thanks to Boston’s Institute for Human-Centered Design for providing lab set-up and staff for this study. to iMotions for creating game-changing biometrics, and to Justin B. Hollander of Tufts University for his initiative, collaboration and support for studies outside Boston.

1 Response to If You Want To See How People ‘See’ Boston City Hall – Eye Track it!