Designing Inside-Out: How Hillary’s Video Grabs your Mind in Milliseconds 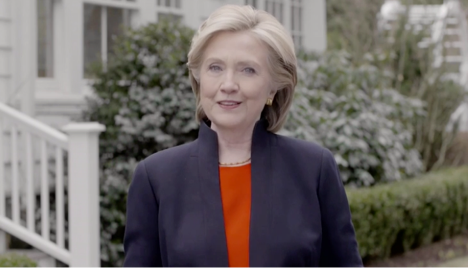 Hillary Clinton’s video officially launching her presidential campaign came out last month and we still can’t get enough of it.

It’s a picture-perfect demonstration of how the human brain works, what it’s built to focus on, and how it arrives in the world designed to connect to other members of our species more than anything else.

When it comes to getting people’s attention, there’s one thing marketers and neuroscientists agree on: we are animals! And what gets our attention fast, unconsciously, is seeing other animals. Given that we evolved in the natural world, and are descended from creatures in the wild, this makes sense.

Welcome to the zoo!

Dissecting Hillary’s video (forgive the biology metaphor) reveals thousands of head, hand and body shots, meticulously selected and spliced together to hook us.

The video is a mere 2 minutes and 15 seconds long or a grand total of 135 seconds. But given that videos on average show 24 to 30 frames per second, that’s well over 3,300 individual images, or quite a lot of buckshot.

And the ammo analogy is apt: look at the first second of Hillary’s video which sets the standard for what follows:

That first fractions of a second show a man, his back to us with arms outstretched, hanging a framed photograph of a pair of hands, followed by a shot of an attractive woman holding an object in her hands. The tally for this first second, then, comes in at three sets of hands and two bodies, including one smiling female face.

Check out the next second:

There’s the same woman and her hands, a silhouette of a couple and their hands and a young child her hand outstretched heading towards the hand of an adult who’s off camera. Adding it up, that’s four different bodies, including the child and 5 sets of hands, (in some cases, only one hand of the pair is visible); there are also two smiling faces.

We have three different bodies, including one of a small child, and two pairs of hands. The three faces are all female, and one in profile, smiling.

Doing the math, in the first three seconds, we’re hit with 8 different people, 9 sets of gesturing hands and three smiling female faces. Our brain’s hooked, its appetite whetted for the 132 seconds to follow.

Why do hundreds of head, hand and body shots appear in Hillary’s video?

These are the specific objects our brain is wired to see and take in unconsciously, or without effort or any conscious direction on our part. This is what our brain as a brain looks for automatically. As modern as our society may feel, and as technologically proficient as we may be, our perceptual system evolved in the wild and remains designed for that place. After all, we came to be in the African and later Eurasian savannah where lions or snakes showed up at any moment. We learned to survive in an unpredictable place for millenia.

So the video sets it sights on sating our animal instincts first, before it takes on our uniquely human trait: story-telling. We distinguish ourselves as the narrative species, par excellence, always hungering for a tale. Stories give us our humanity. And here too, the video goes all out to feed us.

Hillary’s video doesn’t tell one story in 135 seconds – it tells twelve, with hers neatly tucked in at the end. It outlines the narratives of eleven different Americans “getting ready” for a change or transition: a gay couple preparing to marry, a child entering school, a mom going back to work after staying home to raise kids, and two brothers opening a new restaurant. Only at 1:32, or two-thirds of the way in, do we learn that Hillary’s “getting reading to do something, too,”and what that something happens to be, and how it is orders of magnitude more complex and ambitious than the down-to-earth tales that preceded hers.

There is fantastic power in ‘designing inside-out,’ taking the human brain’s predispositions as your starting point and building your message from there. That is what we see in this video’s careful orchestration. Steve Jobs famously said, “The broader one’s understanding of the human experience, the better design we will have.” Indeed, that idea was at the root of his company’s stratospheric success. And what works for computer products is transferable to politics – and building design, too.

If you want what is, arguably, the most powerful job in the world, one tack is to think inside-out, and craft your message brain first.  Only time will tell how powerful the rest of the campaign turns out to be. And the fact is, no matter this campaign’s outcome, our brain’s body-bias, will remain.