Eye-Tracking Picasso: How We See Art

Eye tracking, often used in web and ad design today, can help us see how we see art. Here’s Femme a la Fenetre, (Woman at a Window) a portrait Picasso painted of his mistress Marie-Thérèse in 1936. (It sold at auction for $17.2 million in 2012.) We set up an image of the painting on a computer monitor equipped with eye tracker to better understand what makes her so compelling.

And found out fast: her eyes. TTFF stands for Time To First Fixation. The image below show how all of our 33 volunteers took less than 1.5 seconds on average to focus in on her eyes and nose area, spending 3.4 seconds there in a 15-second testing interval. Slightly more than three-quarters of the participants then went on to check out the date of the painting just above her head: 13 avril xxxvi (13 April ’36) – but they spent much less time there (0.6s).

And what would happen if we removed an eye? Courtesy of Photoshop, we did, with the following result:

People didn’t spend as much time looking at her eyes or face!  Their brains simply wouldn’t let them. They took a bit longer to find the face (TTFF=1.6 seconds, versus TTFF=1.5 seconds in the first image) and spent less time looking at the eye and nose area, 2.7 seconds versus 3.4 seconds in the original image. With one less eye, almost half the test subjects (12 out of 30) then went on to focus on Marie-Thérèse’s left hand, which was ignored in the first painting.

The shadow images below, another way to view aggregate data, again show how people focus attention on the central facial area more sharply and exclusively when it has two eyes, while their attention disperses broadly over the face to the hands when only one eye is ‘in the picture’. 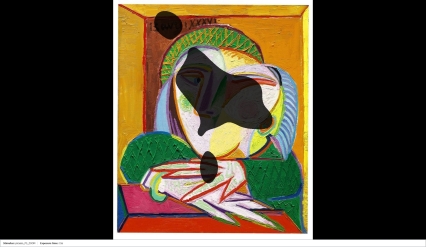 Eyes matter in art and in evolution. We see here how much of the way we look at art is not under conscious control, but inherited from billions of years of earlier life on the planet. Animals that didn’t pick up on eyes in their midst paid a price – demise; those that did survived – our ancestors became fast ‘face-i-tects’ and’eye-i-tects’. Picasso seems to have picked up on it.

“L’art est un mensonge qui nous fait comprendre la vérité,” (Art is a lie that tells us the truth), he once said. 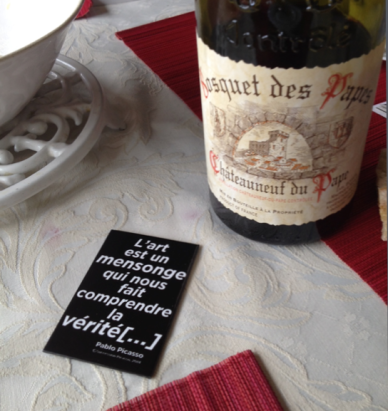