‘Ux+Design’ Conference Take-aways: Biometrics Can Tell Us a lot about Buildings …and Ourselves

A good turnout at the 1st International Urban Experience and Design (Ux+Design/2019) conference at Tufts last month, which drew architects, planners, researchers and students from around the world interested in improving the built environment and better understanding our responses to it.

Here are some of the slides from the April 26th event, the ones below from the first panel: Using Biometrics to Measure Urban Design + Architecture.

Presented with Peter Lowitt, FAICP, Director of the Devens Enterprise Commission. these slides* show how biometric aggregating software such as 3M’s web-based Visual Attention Software (VAS) can predict how people will take in a scene and forecast human behavior. Are we likely to walk down a street in a new development or choose to remain in the car?

The software, based on 30 years of eye-tracking studies, helps researchers explore how people ‘unconsciously’ take in their surroundings, predicting areas that immediately catch the eye. The ‘Regions of Interest’ that draw people in are shown below as percentages, with areas circled in red likely to attract the most attention, areas in yellow less so, and areas not-circled likely ignored completely.

These percentages track ‘unconscious’ brain behavior, or the first 3-to-5 seconds we look at something; this critical pre-attentive phase, before the conscious brain gets into the act, provides the foundation for behavior, we tend not to move towards something we haven’t fixated (or focused) on pre-attentively first.

In the slide above we see how the arrangement of aligned porches, on the left, draws the eye down the streets, while the blank garages on a back alley, at right, do not. (And that happily, fits with the developer’s intent to encourage walk-ability on the main street and privacy around the garages.)

Biometrics are also great at create compelling images which, aggregating a lot of data, make the science accessible; in the case of the heat maps below, the images glow reddest where people look most, fading to blue in areas that receive less attention, and going black where likely no attention will be paid at all. It’s hard not to get it when things are presented this way!

What else can biometrics do? Predict the sequence and direction where we’ll not only look but likely walk! Fact is, walking bipedally is hugely complex for the human brain – so we do it best without having to consciously think about it! Below, with the visual sequence deconstructed, we see why the street at left will always invite walk-ability while the alley at right can’t; it’s simply too much for the brain to figure out, pre-attentively.

This all goes to show how ‘unconscious’ processing directs behavior in the built environment more than we may realize, which also was one of the themes (and Learning Objectives) of the Ux+Design/2019 conference. Others are listed below and we’ll return to them in future posts: 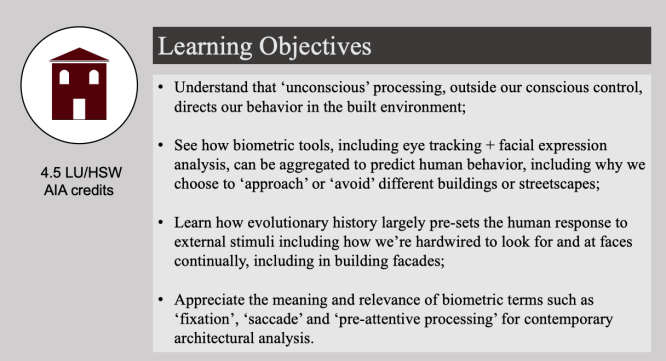 1 Response to ‘Ux+Design’ Conference Take-aways: Biometrics Can Tell Us a lot about Buildings …and Ourselves